Since 1985 Rotary has led the battle against polio, and kept the pressure on as worldwide cases plummeted from 350,000 per year to 23, for 2020. Now, Rotary and its partners are This Close to making that dream a reality.

Rotary, the World Health Organization, UNICEF and the Centres for Disease Control and Prevention launched the Global Polio Eradication Initiative in 1988. In 2007, the Bill & Melinda Gates Foundation joined Rotary in its commitment to ending polio.

Since we started the fight against polio, we’ve reduced the number of polio cases by 99.9 percent, but we will not stop until we reach zero. If polio is not eradicated, hundreds of thousands of children could be paralysed. Global health care costs would rise dramatically, and many children’s quality of life would be drastically diminished.

Polio (Poliomyelitis) is a highly infectious disease that most commonly affects children under the age of 5.

Most know it as poliovirus. The virus is spread person to person, typically through contaminated water. It can attack the nervous system, and in some instances, lead to paralysis. Although there is no cure, there is a safe and effective vaccine – one which Rotary and our partners use to immunize over 2.5 billion children worldwide. 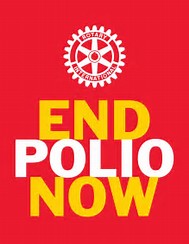